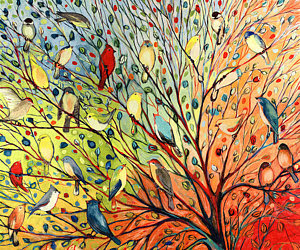 A secret came a week ago though I already
knew it just beyond the bruised lips of consciousness.
The very alive souls of thirty-five hundred dead birds
are harbored in my body. It’s not uncomfortable.
I’m only temporary habitat for these not-quite-
weightless creatures. I offered a wordless invitation
and now they’re roosting within me, recalling
how I had watched them at night
in fall and spring passing across earth moons,
little clouds of black confetti, chattering and singing
on their way north or south. Now in my dreams
I see from the air the rumpled green and beige,
the watery face of earth as if they’re carrying
me rather than me carrying them. Next winter
I’ll release them near the estuary west of Alvarado
and south of Veracruz. I can see them perching
on undiscovered Olmec heads. We’ll say goodbye
and I’ll return my dreams to earth.