What does the phrase, “stop and smell the flowers” mean to you?   Is it simply a cliché?  Or a message reminding us to slow down and enjoy the brief moments we have on this earth…


That time, like the early-spring daffodils, is ephemeral and we can’t recapture moments lost… and we only get to enjoy our loved ones for a season - for aren’t we all just transients passing through at dreamlike speed?
I wasn’t planning a sequel to The Journey, but a certain comment haunted my thoughts.  Not in a troubling or spooky way, but in a numinous light.
Ever tried to comment at length on someone’s post and the whole shebang just vanished into cyberspace?  Well that’s what happened when Rosemary first tried to share her story on mine…
But all the ensuing synchronicities were too uncanny, and to enumerate them would require a separate post.  Suffice it to say for now that amazing coincidences directed her return.  Maybe she’ll grace another white blank space and elaborate here in the comments… hint. 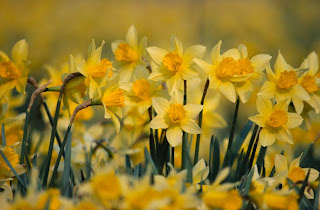 Rosemary’s Story
At last I've made my way back to tell the “Fields of Gold story” that vanished on me the other day when I hit “publish”…
While my kids were younger I was definitely a “destination” person, always rushing and chasing my tail.
One Sunday in late March 2001, while returning home from a day trip with my mother and the children, Mum suddenly shrieked excitedly for me to stop and look at a field full of daffodils that she had spotted.
It had been a long drive and the kids were fighting in the car on the way home and I knew I had loads of Sunday night stuff to do so I didn't want to stop.  But something in her voice made me pull up at the gateway to the field, which was open as the farmer was there.
As we walked inside we were greeted with the glorious sight of golden flowers nodding in the breeze as they seemingly stretched towards the horizon.  Mum asked the farmer could she buy a bunch and he laughed and said that we could take as many as we could carry.
She was thrilled, and on the way home we all marveled when “Fields of Gold” by Eva Cassidy played on the CD – a song that I loved and had on auto play in the car at the time. (Number 1 album in Ireland Mar '01!)
That was the day I learned that the “journey” and the “now” are all that matter.   Almost a year to the day on 26th March 2002 my wonderful Mum died.
And now every time I hear this beautiful song I cry...with joy that I decided to stop that beautiful spring day and walk in the fields of gold.

I love these pastoral images in this video. Serene and soul-soothing.  So in case you missed it the first time around…
Rosemary Hannan lives in Dublin, Ireland where she works as a freelance journalist.  You can read her writing at OffbeatWoman.
You're only here for a short while.  Don't hurry.  Don't worry.
And be sure to smell the flowers along the way.

In what ways do you stop and smell the flowers?  A picnic at the park or a trip to the zoo with the children?   A drive in the country or a night at the theatre with aged parents?  Special birthday or anniversary celebrations?  Being there for a friend when you’d rather be elsewhere?
What memory does this saying elicit in you?
Posted by Debra at 3:45 PM