Modern religion, for the most part, keeps spiritual reality confined to a historical context, as though Christ is no longer living and moving among us. As though he no longer speaks or conveys his ways or will today. But this I know: he still favors parables and remains the quintessential storyteller. He doesn’t give up easily.

He still dramatizes his message, sometimes in unlikely venues. Is it any wonder that he’d speak through horror movies, given the current state of affairs? Think about it: why are post-apocalyptic thrillers on the rise? Mind you, most are trash, but once in a while spiritual treasures can be gleaned.

I’m not an avid movie viewer, but on the rare occasions when I do see a film it’s with my daughter, at her invitation. The most recent two we saw together were A Quiet Place last year and, last week, Bird Box, both packed with spiritual symbolism. Both films like modern-day scenes from the book of Revelation. Both cautionary tales warning that we must guard our senses or be devoured by evil. 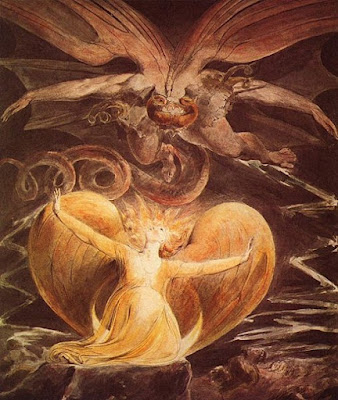 In A Quiet Place noise summons the beast and the only hope for survival is found in silence and stillness. Better to remain quiet and hidden than to invite destruction. The prophetic significance in this film is rich, as evil is forever out to kill whatever divine is being birthed in you, and noise is the destructive force.

Bird Box depicts the necessity of walking by faith, not by sight. Better to blind yourself to evil than to behold its face and be transformed into its image – which is suicidal. Because those who gaze into the face of evil become what they behold. They become deceptive liars. And deceptive liars are rampant out there, as you well know.

But as you also know, when one sense is missing another fills the gap. Blindness begets keener hearing. There’s a scene toward the end of Bird Box where Malorie (Sandra Bullock) is struggling to navigate her children blindfolded through treacherous terrain while deceptive voices increase, pretending to be the children’s mother, aiming to lure them away from her.

She is begging, begging the children to “Listen to my voice. Don’t listen to them. Listen to me.” Sound familiar? My sheep know my voice…and a stranger they will not follow, but will flee from him.

Those who don’t discern the flood of lies gushing from news channels and social media are both deaf and blind to reality because they’ve immersed themselves in the cesspool of deception. The flashing neon sign in both A Quiet Place and Bird Box says this: walk circumspectly, not as fools but as wise, redeeming the time for the days are evil.

When you see a movie and later find yourself moving like the characters, on the que vive, more guarded against invading thoughts that try to creep through the door like a snake, and when you become as mindful of the unseen world as what your natural eyes reveal, you know you’ve touched a deeper dimension of  reality.

I’m well aware that most won’t perceive any spiritual meaning in these parables. But maybe that’s the point. What parabolic treasures have you gleaned from a movie – any movie? Do share.

Will you find a way to escape the river rapids (the dragon’s flood of lies) and find your footing on solid ground and make it to your sanctuary safe and sound?

What are you birthing that must be guarded with your life and protected at all costs from the devourer? You mission? Your life work? Your creative dreams? Your joy and peace? Your soul?