They were quite the little women, my mother, Nellie, and her four sisters: Lizzie, Beulah, Mabel, and Kathleen. She also had three brothers: Henry, Rex, and Johnny. But today I’m focusing on the little women.

Mischief makers. Innocent mischief, but mischief nonetheless. Her journal, a childhood memoir now in my possession, is filled with stories of their antics…The time her older sister, Beulah, decided it wasn’t fair her baby doll was bald and Nellie’s had long lustrous hair.

No, not fair at all. And so, Beulah took the liberty of stealing. Locks of love! Cut and paste and voila! Brand new hair for her own baby. Nellie’s shorn jagged. Her beautiful doll ruined for life.

One of her journal entries describes her childhood living room and a memory of one particular evening of innocent mischief:

“Directly in front of the fireplace there was a settee – a long padded bench with arms and back, a primitive sofa with matching brown leather chairs. It was a cozy atmosphere when we sat there in front of the open fireplace and listened to the logs hiss and spit every so often.

With this living room suite came a wooden table with compartments on each end which held our Holy Bible and several books and magazines. On the table sat our kerosene lamp by which we read at night.

I remember one occasion when Lizzie was sixteen, a young man came to visit her. Mama, thinking she was too young to ‘take company,’ made Beulah and me go in and ‘chaperone.’ Beulah walked in with me right behind her, then picked up the Bible, and the two of us took a seat near the young couple, Lizzie and her suitor, Marvin Gaye.

We sat before them the whole time, reading the Bible, but mostly giggling the night away. Lizzie’s beau never returned after that.”

Ha! I guess not. Poor Marvin. Subjected to a night of silly giggling, scripture reading, looks from two young women saying, don’t even think about it.

Happy Mother’s Day, Nellie. Your memory brought a much-needed smile to my face. It’s like you were here, telling the story all over. 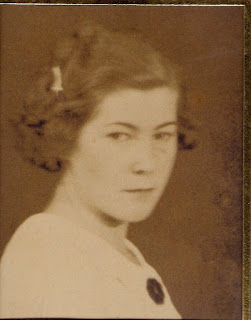 What memory of your mother has made you smile?