The Heart of This Woman

Writing can lead to some interesting places and people.   I never dreamed I’d be speaking at the N.C. Women Writers’ Conference in Winston-Salem one year, where I met keynoter Maya Angelou, well-known internationally as a poet, best-selling author, historian, musician, theatrical producer, screenplay writer, autobiographer, performer… and the list goes on. 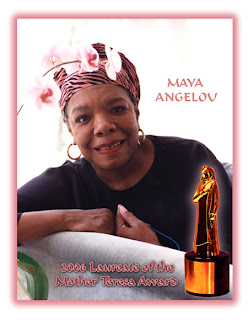 A bird doesn't sing
because it has an answer,
it sings because
it has a song.
~ Maya Angelou 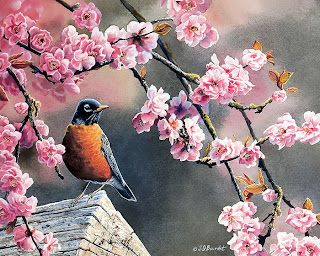 That morning she owns the auditorium.  She stands and sways like a tall oak tree, solid and deep-rooted in truth.  When she speaks a hush falls over the place.
Here is a woman who exudes confidence, compassion, and grace - without a trace of pretentiousness.   One who radiates wisdom, warmth, courage, and dignity.
What I learn from her that day I take home with me, integrate into my psyche, employ throughout my days to the best of my ability.
She is among the wisest of contemporary teachers, able to convey the simplest of truths in the most captivating fashion while fully engaging the imagination.
Lessons Learned
Maya Angelou’s language of freedom is universal and speaks to every human heart.   We are all slaves of the system - in greater or lesser degrees – and programmed to equate self-worth with having learned to jump through all the right hoops at someone else’s command.
Some are slaves to perpetual victimhood and remain stuck in their whining and self-wallowing, which Maya calls “… just unbecoming.”
Others are slaves to their own haughtiness and hubris, and have learned to turn up their nose at those who by worldly standards might be less than successful or less than attractive.
The Beauty of  a Smile
She tells the story of being in a grocery store and seeing someone whom she knows has spotted her.  But instead of acknowledging her presence, that person just turns and looks the other way rather than risk eye contact or – God forbid - conversation.
The woman averts her eyes and pretends to be reading labels on the cans of peaches, treating Maya like a gnat to be brushed away.  But how much trouble would it have been to simply smile and say hello?
How difficult is it to offer a smile and acknowledge the existence of another?  You never know what a difference that simple gesture of kindness might make.
A smile can lift the gloom from a person’s day and remind them that they are worthy of recognition.  That they are special enough to merit attention.  That they are somebody.  Period.
From Maya Angelou I learn to smile at everyone, strangers included.  And mean it.  A smile is a form of blessing, pure and simple.


What writers have made a lasting impact on you?  And why?
Posted by Debra at 4:47 PM