is what you call someone odd, eccentric, one brick shy.
Like that woman seen walking all over town
dressed in black, talking to herself or perhaps to God.

Like that man in church on the front row, eyes closed tight, feigning sleep, his heart remaining open as morning glories reaching toward the sun. 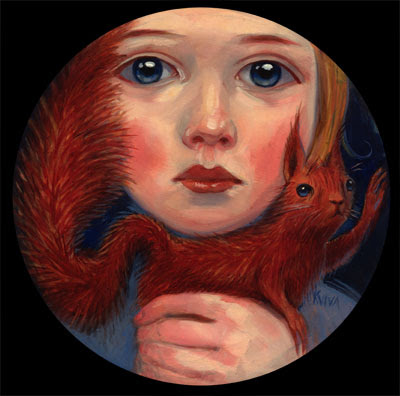 The girl who holds an orphaned squirrel in her bra like a newborn in a snugly, appeased by mamma’s heartbeat. She sneaks him an occasional acorn through the neckline of her tee.

A daughter who could have made good like her mother in nuclear physics but doesn’t. Rather than succeed as such, she’ll stay in touch with her inner child (thank you very much.), shaping owls and salamanders out of clay…

Transforming Altoid tins into treasures. She’ll go to sleep and paint
her dreams in the morning, measure truth by their content…

When she sees a hall at school, students herded along by a bell – a bell!
– she thinks of Pavlov’s dogs and how thrilled she feels to be skipping
down the wall – that’s right, the wall

- beside the girl with the squirrel in her bosom.

The last four lines reveal an unforgettable dream I had, where I was skipping along the wall with an artist friend.  How paradoxical dreams can be. We weren’t the ones off the wall. It’s the others in the herd.  Isn’t life a paradox though?

"'Friendship is born at that moment when one person says to another: "What! You too?
Thought I was the only one....'"C. S. Lewis

How much of a rebel are you?  Are you off the wall too?  How so?
What idiosyncrasy would you dare to share below?