The Atonement of God: A Review 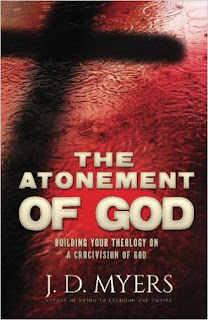 Growing up, I always wondered if there might be more to God the Father than we were taught in church. Was he the ogre in the sky they often painted him to be, the one that kept tabs on your sins and delighted in punishment?

It was natural to wonder why his Son Jesus turned out so opposite. Christ didn’t seem that vengeful. He was the turn-the-other-cheek, forgive-your-enemies, bless-those-that-curse-you type of guy.

Capricious may be the best word to describe how I perceived his Father: the God who’d fly off the handle and wipe out cities in a single breath. The One who opened up the earth and swallowed people whole. Turned Lot’s wife into a block of salt for looking back…

The Quest for Truth

Why did God demand blood sacrifices? It just seemed so... so pagan, like something those other gods would demand to appease their wrath. But Jesus, the Good Shepherd holding the lamb, was supposed to be God revealed in the flesh, so why was he so unlike his Father?

After numerous readings of the sacred text in several translations, and after seeking answers here and there from so-called experts, I was none the wiser. Until a couple of weeks ago when I received a book in the mail that made sense of it all.

The book was titled, The Atonement of God: Building Your Theology on a Crucivision of God. The author, J.D. Myers, grabbed my attention from the get-go with his exegesis of the four most common views of the atonement:

The Penal Substitution (the most widely held theory in modern Western Christianity – the one I was taught since childhood – although it hasn’t been the predominant view throughout church history...

The Christus Victor theory (the non-violent view), which the author clearly espouses.

This non-violent theology seems the antithesis of Jonathan Edwards’ “Sinners in the Hands of an Angry God”, where the preacher’s imagery of God’s wrath burning hot was meant to instill fear and angst in the hearts of people. Edwards was the model preacher for our denomination when I was growing up, so I’ve heard a thousand such sermons – though delivered with less literary prowess than Edwards’ classic.

Myers, on the other hand, depicts God more as a loving parent than a wrathful deity with the might (and resolve) to cast the sinner into the fiery pit. As a mom, what resonated most with me was the analogy he used of a mother warning her child not to touch the hot stove…

And when the child defies the command and touches the stove anyway, she gets burned of course. In which case the mother would naturally feel anguish, not because the child disobeyed her command as much as because her babygirl was hurt.  Myers asserts that God feels more anguish than anger over our disobedience. The pain of sin is punishment in and of itself, according to the author.

Why did Jesus Have to Die?

This is the central theme of the book. Did Jesus die to placate the wrath of God and obtain forgiveness for us? Was it because He needed blood to pay the debt for sin? Or did Jesus bleed and die to defeat sin, death, and the devil?  Who was behind the crucifixion? God, man, or Satan?

The author knew when he wrote this book that those steeped in the Penal Substitution view would probably wrestle with his radical departure from the standard belief. Though I’m not one to swallow everything I read, I did find the book well worth my while, as it addressed the same questions that many others like me no doubt have asked. Any thinker should at least have wondered why Jesus had to die.

If I were to critique the soundness of Myers’ theology based on my own understanding of overall scripture, I’d say that he generally errs on the side of mercy – if that is possible. I honestly don’t know how lenient God is toward sin, any more than I know how angry He is over individual and national waywardness. What I do know is that the author has tackled one controversial topic.

I commend Myers for defending the merciful and compassionate nature of God, and tend to agree that we mere mortals are too quick to project our internal anger onto Him - which the author believes to be the case during violent episodes throughout scripture. Not that he denies the inerrancy thereof, but he contends that mankind is more likely the culprit for violence and destruction than God.
______________________

For more information on J.D. Myers and his books, visit his site.

I received this book free through the Speakeasy blogging book review network, and was not required to write a positive review. The opinions expressed are my own. I am disclosing this in accordance with the Federal Trade Commission’s 16 CFR, Part 255.


#SpeakEasyAtonementOfGod
Posted by Debra at 5:06 PM